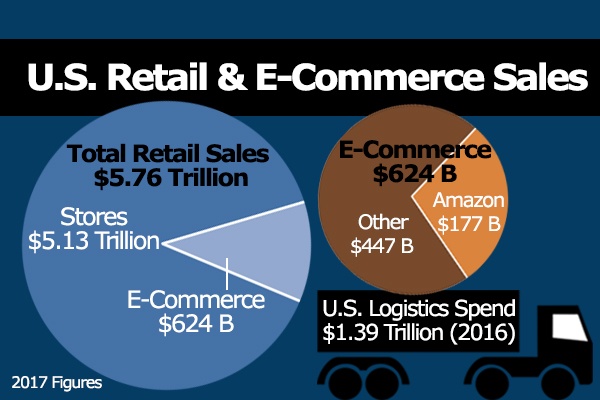 Amazon recently introduced a new logistics service for their third party sellers. The new service allows third parties to order an Amazon truck to pick up their shipments and bring them to Amazon’s fulfillment center, rather than shipping them to Amazon themselves. This could mean extra business for Amazon’s fleet of roughly 6,000 trucks and is another signal that they will continue to increase their involvement in logistics. 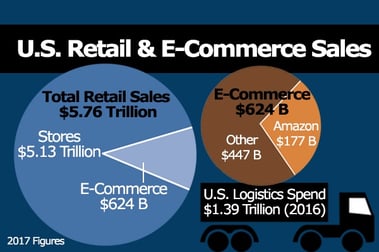 Additionally, Amazon also has begun to act as its own freight broker rather than relying on 3PLs to coordinate shipments, in order to improve margins. According to a recent article in Transport Topics, it brokered its first load this past August, 2017. Amazon Logistics first registered with the FMCSA in March, 2016.

In a recent FleetOwner article, John Larkin, the Managing Director of Stifel Capital Markets, mentioned a few other of their advances:

“Just in the past year or two, the company has rolled out its own trailer fleet, has developed an Uber-like last mile delivery process named Flex, has received its license to operate as a non-vessel owning common carrier (NVOCC) in the international container shipper market, has developed its own air parcel hubs with its ‘own’ dedicated aircraft, has been at work developing its own truck brokerage operation, and recently revealed a plan to deliver packages by drone from airborne warehouses,” he said.

It’s easy to see how this actions could spook FedEx, UPS, and their investors. FedEx has claimed that it has no more than 3% of its business coming from any one customer. UPS is unwilling to say what percent of their business comes from Amazon, but a SEC rule requires it to disclose if it has any clients that represent 10% or more of its revenue (a disclosure they’ve never had to make to date.) However, the combined impact of losing Amazon’s business and Amazon taking on their clients in the future could have a larger effect.

We’ll be watching to see what happens next and how their influence on the logistics industry develops.