Does global warming really exist? What a 3PL or shipper needs to know.

A recent story on The Weather Channel’s website recounted one struggle faced in the powerful winter storm in America last week:

"Help had finally arrived Monday for six semis and about 375 vehicles that were stuck along a snowy stretch of interstate in southern Illinois. The director of the state emergency management agency said a few semis jackknifed near the intersections of interstates 57 and 70 in Effingham Sunday night, setting off a nasty chain reaction. Cars were stuck behind the semis, and then 8 foot snow drifts covered the cars. A special 10-ton National Guard vehicle called a "wrecker," along with 100 emergency personnel, had to be used to move the semis. No one was injured.”

In the midst of this storm, the Midwest and Northeast saw temperatures with wind chill dropping below negative 50 degrees this week. While the thermostat dropped, the debate over global warming heated up once again.  Why would we still have such cold temperatures if the earth is warming? Are extreme temperatures a result of climate changes? What does this all mean for shippers and third party logistics?

One side of the coin: global warming is a real problem

In a recent CNN article, “Record cold doesn’t disprove global warming”, a professor at Columbia University's Lamont-Doherty Earth Observatory argued that while it’s hard to pin down the cause of a single weather event since weather is inherently unpredictable, “there can be larger causes for gradual changes in the probabilities that certain types of events will occur. Global warming is one such larger cause. Of course, the cold snap which the current jet distortions have brought us doesn't contradict the fact of warming. It's the exception that proves the rule. This is the coldest weather in about 20 years. But it has happened before, and cold weather is happening less often overall.”

The other side of the coin: global warming isn’t a problem at all

Another article, “No Need to Panic About Global Warming” in the Wall Street Journal provides the opposite view.

This article argues, “ There's no compelling scientific argument for drastic action to 'decarbonize' the world's economy […] a large and growing number of distinguished scientists and engineers do not agree that drastic actions on global warming are needed.” In 2012 a Nobel Prize-winning physicist, Ivar Giaever, resigned from the American Physical Society (APS) with the statement, "I did not renew [my membership] because I cannot live with the [APS policy] statement: 'The evidence is incontrovertible: Global warming is occurring. If no mitigating actions are taken, significant disruptions in the Earth's physical and ecological systems, social systems, security and human health are likely to occur. We must reduce emissions of greenhouse gases beginning now.' In the APS it is OK to discuss whether the mass of the proton changes over time and how a multi-universe behaves, but the evidence of global warming is incontrovertible?"

The article goes on to reason that global warming hasn’t happened for the past decade and, the warming that’s occurred in the 22 years since the U.N.'s Intergovernmental Panel on Climate Change (IPCC) began issuing projections has been smaller than predicted -- suggesting that computer models have greatly exaggerated how much damage additional CO2 can cause. The article also argues that many scientists, and especially the younger ones, are intimidated out of questioning global warming much in the way Galileo was shunned.

How does global warming impact a 3PL or shipper?

According to the EPA, transportation produces 28% of total U.S. Greenhouse Gas Emissions, the primary agents allegedly responsible for trapping heat from escaping outside of the earth’s atmosphere. The EPA cites several ways that transportation could be negatively impacted by global warming, including, “As temperatures increase, many types of vehicles can overheat, and tires will deteriorate more quickly.” Many other reasons are listed on their website along with a ways that global warming would improve certain logistics problems like icing, but the predictions are overall negative for the transportation industry. 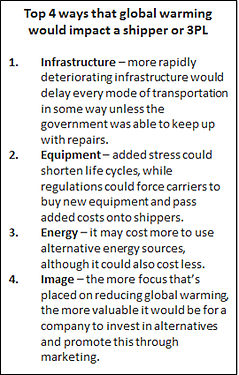 These and other potential issues, as well as consumer preference for environmentally friendly companies, have generated large scale investments in alternatives like ethanol, biodiesel and hybrid trucks.  They’ve also been responsible for federal regulations on emissions. If global warming became disproven, it would render many of these moves useless.

While it may not be clear whether the globe is warming in a damaging way, it’s clear that there’s a need for additional research in this area. I highly recommend keeping up with this issue and looking at how our political actions can have an impact on this research, federal regulation and ultimately the logistics industry.