Historic Volumes at the Port of Los Angeles

Record after record has been broken for the number of ships at the Port of Los Angeles this year. The newest record of 103 ships at terminals or offshore made headlines recently, and may soon be broken as ships continue to pour into the ports to deliver goods for the holiday season.

While there are many causes for the backlogs at the ports, one clear contributor is port volumes.

Recently, the Port of Los Angeles held a press conference in which they highlighted several of the key metrics they’ve seen in September and throughout the year.

One of the standouts was that the Port of L.A. is seeing not only the highest volumes in their 114 year history, but also the highest volume YTD for any port in the history of the United States. This past September was their strongest in history.

The Port projects that the total number of TEUs for 2021 will close the year at 10.8 million, which far surpasses the previous record of 9.5 million in 2018. 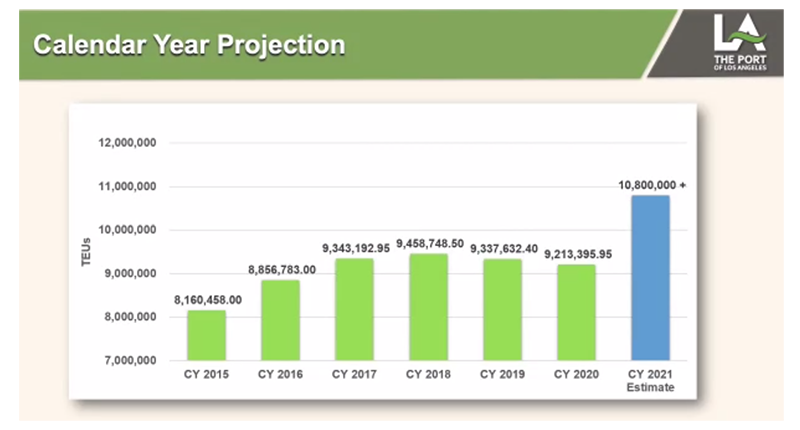 To keep up with these record volumes, “Longshoremen have been on the job 6 days a week since March 2020”, noted Gene Seroka, Executive Director of the Port of Los Angeles.

Still, as of the time of the press conference, ships were waiting an average of 12 days to dock and unload. This and other factors have spurred the government to intervene and the Port of Los Angeles to move to 24/7 operations in mid-October.

For 24/7 operations to be effective at the ports, it will require increased activity from transportation providers and companies receiving goods, as well as the ports.

White House Port Envoy John Porcari explained that the supply chain is a private sector system and their role right now is to bring parties together to provide greater coordination. So far the government has secured commitments from some of the largest shippers such as Walmart, Target and Samsung to move to 24/7 operations as well.

Seroka highlighted just how many players involved in this game. Over 125,000 companies use the Port of Los Angeles for imports and another 75,000 export through this hub. After containers arrive at the ports roughly two thirds of them leave by truck, carried by one of 18,000 truck drivers registered to do business there. The other third leaves by rail, which involves about 100 trains leaving the port every day, and has recently cleared its backlogs.

Whether or not enough parties will work together and effectively utilize 24/7 operations to clear the L.A. Basin and reduce delays is yet to be seen but there is widespread apprehension in the industry due largely to the continued shortage of drivers in the trucking sector.

At the end of the press conference, several questions were addressed:

When will 24/7 operations at the ports begin and will they take place at every terminal?

Seroka commented that the anticipation is that everyone will move to 24/7 operations and that the commitments that have been gained by some of the largest companies in the country are key.

Will crane operators work all night or pre-load onto chassis for overnight pickup?

Each terminal will need to determine what will work best, said Seroka.

How will they ensure that the move to 24/7 operations is more successful than the pilot of this in Long Beach?

Seroka acknowledged that it will take getting the “entire orchestra of participants to get on the same calendar and keep moving”. He also mentioned that the metrics they track with their port optimizer system will enable them to track performance.

What are the current shift times at the Port of Los Angeles?

There are nuances with each terminal, Seroka noted, but typically the shifts are from 8am to 5pm, 6pm to 3am, and 3am to 8am.

How can the government change the behavior of all the facets of the system?

What is the timeline for everyone to be on the same page of 24/7 operations?

Seroka noted that it will be an ongoing effort and recognized that there is the need to act quickly with the holiday season underway.

Is having so much volume come through two ports an issue of national security?

Porcari noted that they’re working with States to help them think of goods movement as part of their central economic development plan, which could impact multiple modes.

Has though been given to the environmental impact of 24/7 operations?

Seroka noted that the Port of Los Angeles is engaged in ongoing conversations with environmental groups and that moving to 24/7 operations will help reduce the engine requirements for ships that are currently anchoring off shore for long periods by reducing their length of stay.

What other alternatives or initiatives are being pursued?

Porcari metioned inland pop up sites that can be used to ground containers on an interim basis. He also mentioned that they’re been working with the states on streamlined procedures for CDLs to help increase the pipeline of drivers.

When will the backlog be cleared?

Seroka stressed that it will take commitments from multiple partners

“We may plateau on import volume after the Thanksgiving holiday and between that and the year end holidays and new years. We’re going to pick up again in the first month of 2022 because we’ve got an early lunar new year the first week of February. Most retailers are telling me - the big box home improvement stores to give you an example - that following the new year holiday or some semblance thereof because most factories are still trying to keep up in Asia, that we’ll see the second quarter of 2022 focused on replenishment of inventory at the store and facilities level.”

Is there a weak link in the supply chain in Southern California?

Pocari commented that every link in the supply chain in Southern California is stressed right now, and has been for at least the last year and a half. He added that the ability to have enough chasis and truck drivers are limitations, and the availability of off-port properties for grounding containers and container transfers is another problem that’s not unique just to Southern California.

“Every bit of the supply chain is stressed and we need to work on every element.”

Is there a labor shortage? Are vaccine mandates a problem?

Seroka noted that they have three segments of labor: longshore men and women which they have an ample number of, truck drivers which are still in short supply, and warehouse workers, which haven’t been haven’t been 24/7 typically, and many have moved on due to the pandemic.

Porcari commented that the economic outcomes are not within his field but they’re committed to improving the flow of freight.

When will the first terminal at the port go 24/7?

Seroka responded that it’s too early to say.

What’s the biggest factor contributing to the delays at the ports?

Interested in learning more about what’s happening with ocean shipping?

Listen to our interview with Peter Tirschwell, Vice President for Maritime & Trade at IHS Markit.