With a freight recession likely, should your freight costs be going down?

With recent reports that the freight market appears to be softening, I’ve received some interesting emails and calls from logistics executives. They've shared some questions they've fielded from other C-Level executives who have seen reports from consultants or news articles and now are asking: “Why haven’t our company’s freight costs gone down?” And the next question on their agenda is: “Are we getting the best rates possible in the current environment?”

With those questions on the table, these logistics executives want to know: “Should we be renegotiating our rates with our carriers?” In addressing that question, here are three things that should be considered before you conduct a truckload or LTL sourcing event, or reach out to your carriers.

First, it is important to understand that a carrier’s embedded cost structure is significantly higher than it was a year ago.

One of the things we learned from Shelley Simpson, President of JB Hunt, on one of this year’s webcasts is that the costs of operating a motor carrier are significantly higher than they were one year ago. In order to protect their margins and profitability, the carriers have great data and are disciplined about managing their capacity. What does this mean for shippers? Carriers will look at the integrity in their rate structure to determine which shippers will get their assets.

For carriers, how important is this emphasis on managing their capacity? Well, when you look at the fact that carriers like FedEx have been, according to FreightWaves, able to more than double their operating income year over year even though daily tonnage decreased 5% roughly, it sends a powerful message to carriers: A disciplined pricing process can protect their profitability. We’ve also seeing growth in air cargo rates despite volume declines.

This doesn’t mean you should give up any hope of getting better rates for your company. But before looking for better rates, make sure you have a sound strategy, accurate and relevant data, and the willingness to make changes that can lead to reduced rates even in the current market.

Second, carriers are watching whether you act tactically or strategically.

As we've heard from many carrier executives, a lot of shippers say they want to be a “shipper of choice” or “carrier friendly.” But as we heard during our webcast from Geoff Muessig, EVP with Pitt Ohio, carriers can identify which shippers are in fact “Carrier Friendly” versus shippers and who are working with the carriers in a transactional way. The carriers can respond accordingly.

A tactical shipper only pursues the least cost possible. When there is an inversion of rates between the spot market and the contract market, they’ll focus on driving down rates.

A strategic shipper works with carriers over the long term to find mutually beneficial ways to lower rates. This helps them also to ensure they'll have capacity when needed.

Third, as part of an initiative to reduce freight costs, look at the other options that can reduce your supply chain and freight costs.

Before you go to carriers to renegotiate your rates, ask yourself: Have we considered how we can lower our supply chain costs by changing some practices and processes? This could help you get a better understanding of how much you might need to push for lower rates.

Another thing you should do before negotiating with carriers is get a better understanding of what’s happening in the economy and the freight marketplace. To help you do that we create a quarterly Freight Market Update and you can view the latest edition here. 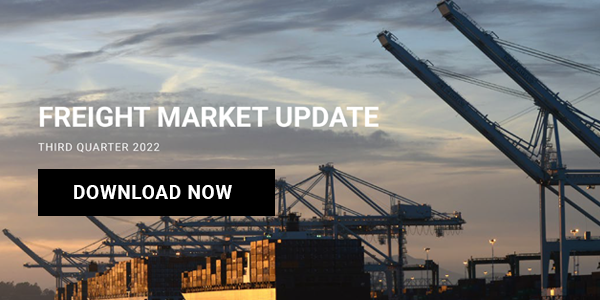 BY MIKE REGAN, CO-FOUNDER OF TRANZACT
CONNECT ON LINKEDIN